The procession to the ceremony site begins.

I wanted to do something special and romantic for my husband while we were in Thailand as part of our trip through Southeast Asia to our 10th wedding anniversary.  We are so grateful to have found each other and have this time together that I could not let this milestone pass without marking it in a way that would be memorable.

We were showered with rose petals along the procession.

For months before we departed, I worked with the Four Seasons Hotel in Chiang Mai to plan a “surprise” Buddhist Wedding Blessing Ceremony.  Several people asked if we were Buddhist, which we are not.  We did not need to be in order to experience the culture, symbolism, and spirituality of the ceremony. 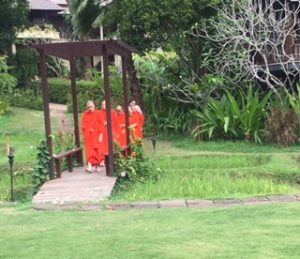 Procession of the Buddhist monks.

The ceremony began with a procession through the gardens and rice fields of the hotel to the area that had been designated as the ceremony space.  We were joined by two of our dear friends who were traveling with us and two new friends we met on the tour.

The ceremony included nine Buddhist monks and a village elder.  Watching them process towards us was very uplifting and moving.  At one point in the ceremony the lead monk put three white chalky circles on our foreheads signifying a good luck blessing, marriage, and the beginning of something new and good, in our case, renewal of our vowels for our 10th anniversary.

After the ceremony was concluded, we had a private romantic dinner in a private rice barn which was an open structure on the hotel property that was formerly used for drying the rice from the fields but now served as a private dining space for small parties.  We had course after course of wonderfully prepared Thai food and were lulled by traditional music.  It could not have been more romantic way to celebrate our journey. 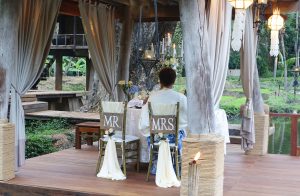 « If You Could Turn Back Time – Would You?
Whom Do You Call Your “Best Friend”? » 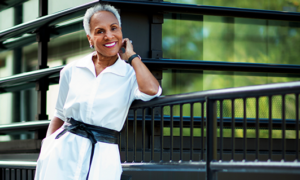 Women Empowerment, Motivational and Inspiring Speeches! I have always had a passion for life and for encouraging and empowering those around me as a mentor or life coach … END_OF_DOCUMENT_TOKEN_TO_BE_REPLACED